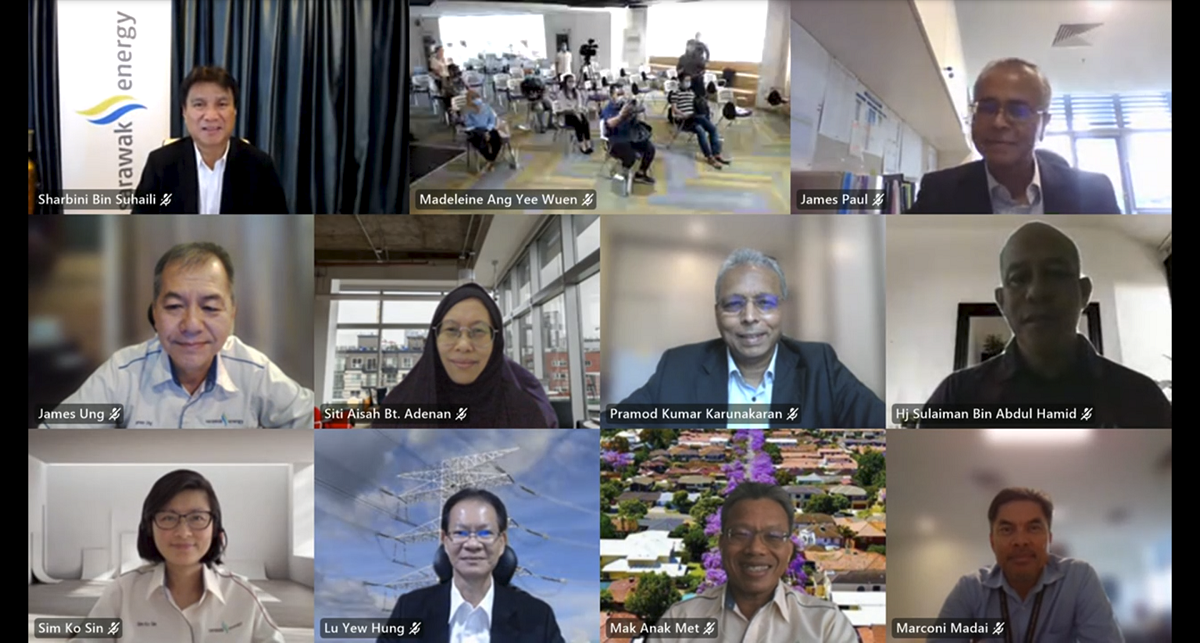 Datu Haji Sharbini Suhaili, Group CEO Sarawak Energy (top left) dialing in to present the business updates to members of the media in a virtual hybrid session. Also dialing in were Sarawak Energy GEC members and Heads of Departments.

The update was delivered by Datu Hj Sharbini Suhaili, Sarawak Energy Group Chief Executive Officer. He also announced that the energy developer and power utility company would be marking one hundred years of powering Sarawak in 2021.

The media were updated on power supply reliability improvements, the progress of rural electrification, Baleh HEP and major Transmission Backbone projects as well as the ongoing digitalisaiton of its operations and its future roadmap and regional ambition.

Sarawak Energy’s roots go back to 1921 when it was set up as a unit in the Public Works Department to supply electricity to the public. Today, the Sarawak government owned corporation employs over 5,400 employees and has a customer base of 710,000 accounts, achieving a significant sustainability milestone after it focused on renewable hydropower development and generation to become Malaysia’s largest renewable energy provider. The focus on hydropower has enabled electricity export to Kalimantan Barat, Indonesia with the prospect of an additional export customer in 2023 to Sabah.

“Sarawak Energy has made tremendous strides over the past 100 years in our transformation from a traditional utility into a modern and agile company and energy developer with regional ambition. Our Sarawak Energy Excellence 2022 strategic roadmap is a blueprint for uniting and focusing our organisation as we work towards being on par with the best utilities in the region,” he explained.

Sharbini also highlighted operational achievements in which improvements were made in enhancing the customer service experience with customers rating Sarawak Energy over 95.06% as of 14 December compared to 77.42% in 2016 measured by its Customer Satisfaction Index.

“Our System Average Interruption Duration Index or SAIDI for Generation, Transmission and Distribution has improved by 70% since 2016. We recorded 72.5 minutes in November 2020 compared to 242 minutes in 2016,” he said.

Despite the effects of the COVID-19 pandemic, Sarawak Energy kept its projects on track with the support and guidance of the Sarawak Government and the State Disaster Management Committee.

Sarawak Energy’s continued focus on hydropower is on track with the 1285MW Baleh Hydroelectric Project expcted to be completed by 2026 following the completion of the diversion tunnels in October this year, a critical package in the construction of the main dam.

This is in addition to Sarawak Energy’s efforts to reinforce its supply system with major progress achieved on the 500kV Backbone as well as on the Northern Grid Extension project to connect areas in Northern Sarawak to the main grid.

The Northern Grid Extension project which is being implemented in phases to extend the transmission grid across the length of Sarawak and create injection points for potential power export to Sabah to realise the Borneo Grid.

“In progressing power export discussions, we signed the Term Sheet with Sabah Electricity on 21 October 2020 which sets out the intention for the interconnection to be completed by 31 May 2023 for 30-50MW over 15 years. This is a positive development which brings us closer to realising the Borneo Grid and subsequently to grow into a regional powerhouse,” said Sharbini.

Attributing many of the improvements and accomplishments to the company’s strategic pivot to technology and digitalisation, he said, “We took transformative steps in changing the way we work to remain efficient by learning to achieve a lot more with the same level of resources and found ways to capture opportunities from managing the crisis and make them work for us instead,” he said.

Sharbini added that Sarawak Energy had started digitalising its facilities with automation projects essential to adapt to the disruptions of Industry 4.0. The team is pursuing remote access capability for its power plants and incorporating virtual reality (VR) technology into technical training.

Before the update, members of the media experienced a virtual reality tour of the 2,400MW Bakun HEP to show them how electricity was generated, transmitted and distributed till supply reaches Samalaju Industrial Park.

The tour was accompanied with a briefing from James Ung, Chief Executive Officer of SEB Power, Sarawak Energy’s generation arm.

James said that hydropower development has supported Sarawak’s industrial growth, created job opportunities and allowed Sarawakians to enjoy the lowest power tariffs in Malaysia and amongst the lowest in the region.

“In addition to energy affordability, Sarawak’s focus on hydropower has enhanced energy security and reliability, powering Sarawak’s ambition to achieve developed status by 2030 through hydro-industrialisation from SCORE while providing the foundation to accelerate rural electrification, to meet United Nations Sustainable Development Goal (UN SDG) #7 on access to renewable energy and modern power systems.

“Sarawak’s hydroelectric plants have also proven to have successfully reduced the severity of downstream flooding situations during unseasonal localised heavy rainfall by holding back large volumes of rainwater all year round.”

About Us
SDI was established on 2 November 1995. It is registered as a Company Limited by Guarantee and not having a Share Capital under the Companies Act, 1965, Malaysia. As an autonomous non-profit research institute, it is entrusted to undertake inter-disciplinary research on pertinent development issues related to the state and nation for policy inputs to the government and private organisations / clients.